Whenever you think of the North East of England you tend to associate it with Newcastle, Greggs, Geordies, Newcastle Football Club, drinking, stag and hen nights and depending on your age group Geordie Shore.  If it was mentioned to you that the north east of England is also home to some fantastic beaches and coastline then you would probably look a little stunned.

Well we thought that what we would do is to create a series of review articles that have a look at some of the little know beaches, coastline areas and landmarks that the North East of England can proudly boast and maybe, just maybe make you think that when you are visiting the likes of Newcastle, Durham or Sunderland then these articles may make you want to try out a selection of landmarks that we will be taking a closer look in these up and coming articles.

Seaburn Beach – a hidden gem in the City of Sunderland!

Seaburn is a seaside resort that is located on the coastline of the City of Sunderland.  It is positioned between the seaside suburbs of Whitburn and Roker and is very much a firm favourite with locals and ideal as a fantastic family-friendly spot.  It isn’t what you would consider as your typical British seaside destination that is filled to the brim with fun fairs, amusement arcades and tourist shops that you would find at the likes of Blackpool or Margate but what it has got is it’s simple, family-friendly beauty and it does have all the usual amenities to make it a very special place to spend a great couple of hours discovering and enjoying.

Seaburn Beach does have everything to keep the family entertained.  Even though we mentioned earlier that it isn’t filled to the brim with amusement arcades it does have two of them which have a whole host of fun gaming machines from twopenny one arm bandits through to grabber machines and including the odd up-to-date arcade machines that would please any hardened PS4 or Xbox One gamer.

Seaburn also features a few children’s playgrounds that are dotted around the area which are well maintained and it also featured some very nice fish and chip shops which are always busy on sunnier warmer days.  It also features a stunning ice-cream stall which is worth visiting called Minchellas where the quality of ice-cream is second to none and well worth the money. 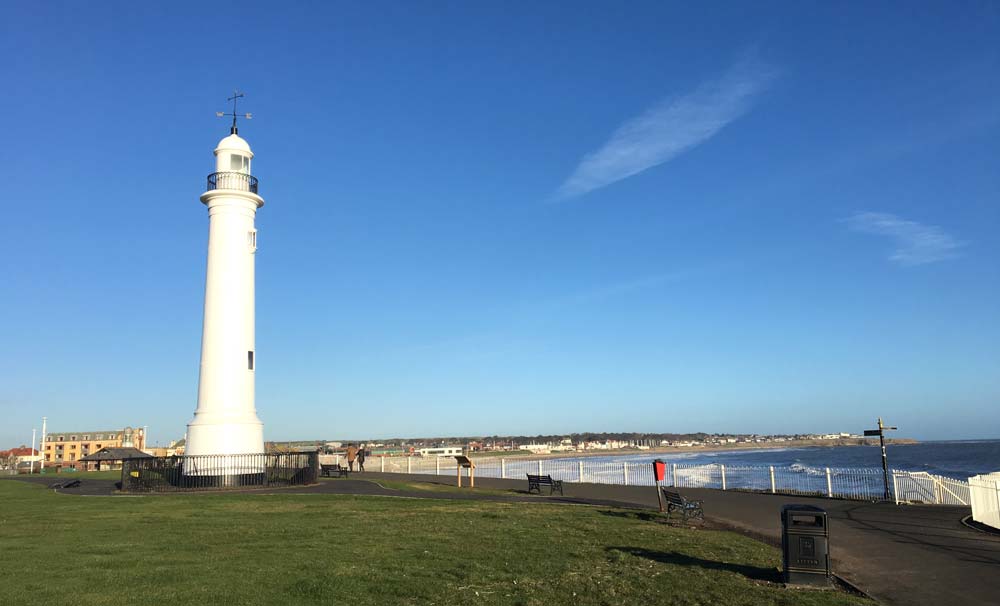 One other thing that we need to mention is that as well as the various chip shops that are dotted around the area there are also some great local restaurants worth trying out which include cuisines such as Indian, Italian and a more recent inclusion of Chinese in the shape of the Fat Buddha chain boasting fantastic views of the sea as it is located right on the seafront.

As well as the above, you will also find Morrisons sitting over the road from the main promenade.  We mention this because we feel that it is a massive plus to the area as they do sell everything you need for a great day at the beach and at the side of the supermarket you will find what we also love about this beach is its fantastic parking.

Now we have visited various beaches during our lifetime and we have always found that parking at the more popular destinations can be a real chore but with Seaburn beach, you are very well catered for.  The only time when you may find a problem with parking is generally when there is a free event held at the beach or when it is a hot Bank Holiday or weekend otherwise the parking is second to none and this alone makes the whole experience of visiting this beach a lot more relaxing.

As we have mentioned that it is family-friendly it also sports some very clean and easy to access public toilets which you can easily find on the seafront.

As well as being a great destination for families young and old it also hosts some terrific events the main one being the Sunderland Airshow that occurs towards the end of July which is a fantastic free event with real-life displays of different aircraft including the Euro Fighter Typhoon and displays from the Red Arrows.  Well worth going to.

Seaburn is also included in Sunderland’s illuminations event that tends to occur from September to November which is like Blackpool’s illuminations just on a slightly smaller scale and includes pop-up fun fairs and stalls to enjoy.  It also plays host to smaller events such as classic car shows, so there’s plenty going on.

If you’ve ever heard about the artist L.S. Lowry who painted matchstick men and matchstick cats and dogs, as the song goes,  you might be surprised to learn that later on in the artist’s life he spent his holidays at the Seaburn Hotel which is now the Sunderland Marriott Hotel, using the hotel as a base to travel around the region painting and drawing the beaches and other local areas of interest.

It goes without saying that we simply love Seaburn.  It has a fantastic Blue Flag awarded beach and is a great place to unwind.  It’s a traditional, family-friendly seaside resort that isn’t tacky and is also in the process of being modernised, due to a new influx of local investment.  It’s very dog-friendly and if man’s best friend isn’t popular with your members of the family then there are even parts of the beach where dogs and their owners are not allowed during certain times of the day, so it is a win-win for everyone.  You are not far from any amenities and if need be you can also do a little bit of grocery shopping if required.

Overall we would heartily suggest as Seaburn as a great place to visit and even stop for the evening.  It has a great hotel and guest houses plus pubs along the seafront.  We wouldn’t hesitate in recommending this place and if you are driving up to Newcastle for a weekend away then why not stop at Seaburn and discover the north east’s hidden gem.

If you would like to know a little more about Seaburn Beach, visit the See It Do Sunderland website by clicking here.

Wondering who the artist L.S. Lowry is?  Read a little more about him by clicking here.

Read our reviews of the other places we have visited by clicking here.

You can find Seaburn Beach in Sunderland here…