When I used to go on my yearly family holiday to Rhyl in Wales, in the ’80s while growing up, I always looked forward to spending all of my money and time in the Amusement Arcades on the seafront.

Yes, Rhyl may not sound like the most exciting place but for a ten-year-old, it was a great place to visit, had loads of fun things to do and above all had loads of Amusement Arcades!

There was always something special about walking into the Arcades in Rhyl.  Seeing all the arcade cabinets on display with the latest arcade games that were on offer at the time, inserting my money and just letting rip in an F14 fighter jet playing After Burner, shooting down aliens in Space Harrier or even enjoying shoot ’em ups like 1942 or Operation Wolf.  For a kid like me growing up who was very much interested in computers and playing games on my Sinclair Spectrum, it was paradise.

Fast forward thirty-plus years and Amusement Arcades are nowhere near as prevalent as they used to be and to a point where they are dying off.  You will find the odd one or two on the seafront but they don’t feature the same quality of arcade games that they used to.  They tend to be grabbers, one arm bandits and if you are lucky you might find a few shoot ’em up style games like the Living Dead or Jurassic Park, none of which I feel have the same fun factor as they used to plus depending on where you go £1 a time isn’t cheap and for that price, you don’t get much time playing them.  Consoles, PCs, Tablets and some smartphones have taken over when it comes to gaming.  Being at home they are easily accessible, cheaper to play, have great graphics and some of the games that are on there like Fortnite have simply taken over.  Which is great, but for me and I would imagine a lot of people in my age range don’t always have the magic of the ’80s and ’90s arcade machine.

Watching a few Retro gaming channels on YouTube I came across one YouTuber who shot their video from a venue called the Arcade Club in Bury Manchester.  Watching the video the YouTuber was going around the venue and all I could see was Arcade Cabinet after arcade cabinet and he was simply raving on about the place.  So with the six-week holiday in place, I decided to go on a 135-mile road trip down to Manchester with my two kids and see what it was all about.

Getting to the Arcade Club, Bury Manchester.

Getting to Bury, which is just ten miles north of Manchester, was fairly easy as it was just off the M66 and as long as you follow the sat nav’s instructions correctly and go straight into the right-hand lane to turn right, if you are heading north off the M66, then finding the Arcade Club should be a doddle.  Unfortunately, I missed that turn and with the Friday early afternoon traffic and my sat nav not showing exactly the way it was a bit of a mission to find, plus the roads around the area are super tight with cars.  Bear my tip in mind with going into the right-hand lane as soon as you come off the motorway and you will be fine.

Parking at the Arcade Club was the only negative in my experience as it wasn’t easy and with the place being busy, due to school holidays, most of the spots were taken up.  With an expert bit of maneuvering, I eventually found a parking spot on site but I would say that if you are thinking of going on a weekend or in the school holidays I would get there early to secure a car parking spot.

Arcade Club is based in an old office-type complex called Ela Mill and on the outside there was some signage but it doesn’t give away anything of what you will find inside.  Split over three floors, the Arcade Club features a merchandising and small shop on the ground floor, where you pay your admission fee.  On floor two there’s the Modern Arcade and on floor three is the Classic Arcade (the place I was most excited about visiting).

Admission for me and my two children was super reasonable, with a kids school holiday offer going on, which was £12 for me (normally £10 to use the Classic Arcade floor or £15 to use both) and £7 each for the kids.  That allowed us to be there from whatever time we had arrived until 5 pm in the afternoon with unlimited access to both floors two and three plus the main bonus was that once you have paid your admission every game is on free play, no restrictions, no more money to insert and that for me was the winner.

Once in the wow factor came when we started to visit floors two and three.

Floor two was first as the kids wanted to see what was going on in the Modern Arcade and they were not disappointed at all.  In there we found a raft of PS4’s, Xbox Ones, a couple of Nintendo Wiis and a boatload of high-end PCs with Fortnite on them.  My kids were over the moon.  Also, there was a section of VR units that had PlayStation VR as well as an Oculus area.  As well as that there were a few classic arcade machines plus some more up-to-date Japanese arcade cabinets with drums fixed to them and Dance Mats.  It really did blow me and my kids away and that was only floor two!

Floor three for me was where the magic lay and boy was I not disappointed at all.  The whole area was filled with every classic, retro, 80’s and 90’s arcade machine/cabinet you could imagine and it was simply heaven.  Walking around I spotted Paperboy, Tron, Star Wars, Space Harrier (the cabinet with the hydraulic movement), After Burner, Pac Man, Defender, Space Invaders, Galaga, X-Men, Simpsons, Operation Wolf, Hyper Sports, Out Run (hydraulic cabinet version) and so much more – over 300 arcade cabinets in all from what I have heard.  It was like being a kid again and as every game was free to play you could just jump on anything and give it a whirl without spending a fortune.

Each cabinet was the original CRT display arcade machine and they were in absolutely amazing condition for their age.  You can really tell that the owner has a real passion for arcade games and pinball tables and keeps everything in tip-top shape, you can even see where they fix them as there is a little room that was open where the engineers were working on fixing some of the broken arcade machines that they were breathing life into.

As it was the summer and the place is filled with arcade, pinball machines, PC’s and consoles it did get a little warm but they do cater for that with large fans dotted around the place and me nor my kids ever felt uncomfortable at all.  Also if you need the toilet, which you can find on each floor, they have spray-on deodorants for men and women which was a great little feature.

On each of the floors you will find a food area, with the top floor being the larger out of the two and you can get the usual fast food items like burgers, hot dogs and pizzas plus drinks and even alcohol if you fancied a beer with your gaming.  The prices were really good, as summer tends to be a very expensive time when you have kids, and the cost of the drinks was close to what you would pay in a newsagent so I was really impressed with that. We enjoyed the hot food that was on offer and it was served by super friendly staff.  In fact all of the staff there were super friendly and only too happy to help.  Also, I forgot to mention that even in the food areas there were a line of PCs with Minecraft for the kids, Pinball machines, Xbox Ones and a few arcade cabinets dotted around for good measure.  Not once were my kids bored which was great to hear. 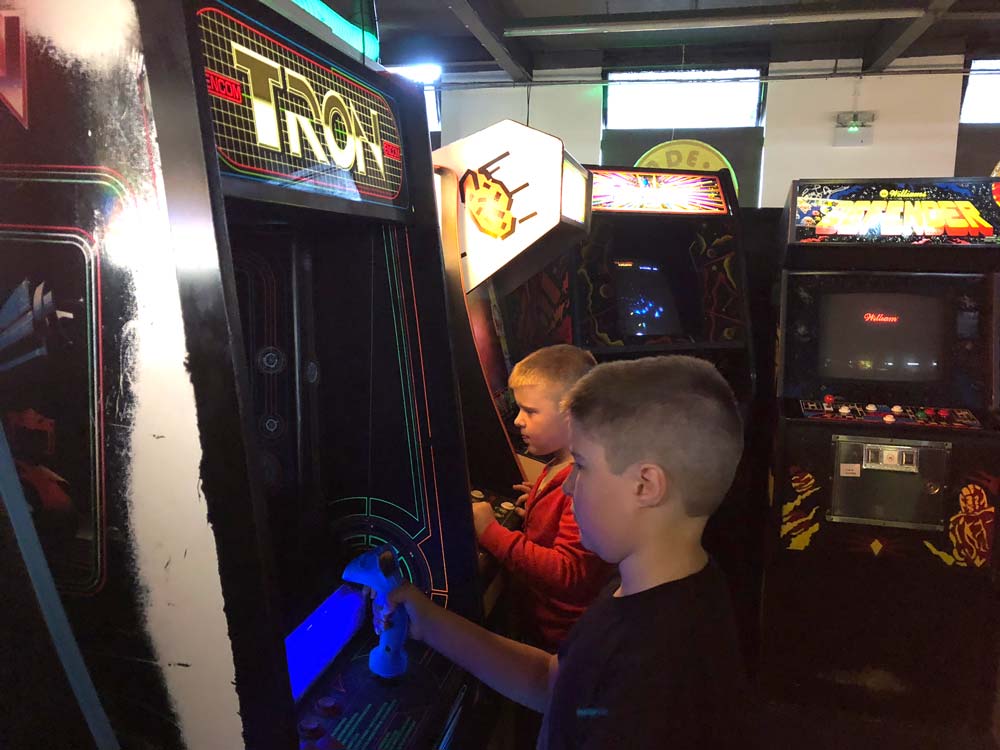 We simply loved this place.  It has everything that you would ever need if you are into retro or modern gaming.  It exceeds expectations and is constantly improving with the addition of a bottom floor coming soon with bigger arcade cabinets plus I have recently heard that they are also extending their parking – which will be a massive bonus when visiting The Arcade Club.

You can really tell that the Arcade Club is owned and run by a person who really does love what they do and only wants the best for their customers.  I couldn’t recommend this place highly enough and I can’t wait to go again, even though it was a 274-mile round trip, it really was that good.

My only regret was that I didn’t take more photos but to be honest I was enjoying myself that much I simply got too carried away.  At least I have another reason to go!

Visit the Arcade Club’s website and see for yourself, trust me you will not be disappointed.